Conduits are portals from where certain forms of The Drudge emerge, in The Conduit. In order to stop more Drudge from coming out of the conduits, the conduits need to be destroyed. This can usually be accomplished with any weapon by shooting the bulge at the top of the conduit. A single grenade or high damage weapons are recommended. Sometimes, conduits are spotted in a cluster and many of them have to be destroyed.

In the first mission, Threshold, Ford encounters an oversized conduit which cannot be destroyed. Instead, he enters it. The next level does not show what happens when he enters, and the story goes back five days earlier. When five days pass, in the Homeland mission, he enters the large conduit, and the mission ends. In the next mission, Checkmate, he comes out of the portal, entering The Trust base, and realizes that The Trust are sending the Drudge to the city through those conduits. In the final battle at the trust base, Michael Ford manages to escape the exploding facility through one of many conduits, leading to a unknown destination.

Conduits reappear in the sequel, this time with a different look. They are now blue and artificially made, some of them can be activated by Ford with the use of the ASE. These conduits cannot be destroyed, and spawn different types of enemies. Atlantis features a conduit that Ford uses to travel at different locations in the game.

a conduit in conduit 2 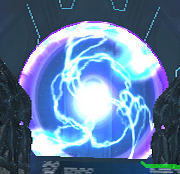 a destroyed conduit
Add a photo to this gallery

Retrieved from "https://conduit.fandom.com/wiki/Conduits?oldid=11001"
Community content is available under CC-BY-SA unless otherwise noted.