"I'm probably the only one left who knows the truth. I know it, because I was there."

Michael Ford is the protagonist of The Conduit and Conduit 2, and therefore the character you play as. He is a former Secret Service agent that was recruited by a mysterious secret organization known as The Trust, after he saved President Charles Thompson from an assassination attempt.[1] In the first game he was voiced by Mark Sheppard, in Conduit 2 Jon St. John does it.

Following his graduation from West Point, Michael Ford joined the US Military. He was asked to become a Secret Service agent, which he accepted. John Adams began to use Michael as a puppet in his plot and placed Ford as a member of the presidents protection squad. When the rest of the squad tried to kill Charles Thompson, Ford was the presidents savior. He was the inducted into The Trust.[2]

John Adams sent Ford on a mission to stop the terrorist Prometheus and retrieve the All-Seeing Eye. Ford was forced to trek the mission alone because Prometheus had used the Bug to sway Trust soldiers on to his side. Ford was supplied with a Trust Visor and thus Adams was able to view Ford's progress. Michael was then able to retrieve the ASE and was sent aboard a subway station where he was to take down Prometheus, his hunt led him to Bunker 13 where he found a special type of Neurotoxin, which is likely the Bug. Ford then makes his way from Bunker 13 to the Jefferson Memorial, where Adams reveals to him that aliens called the Drudge are invading. Adams then betrays Michael and leaves him to die at the hands of the Drudge.

Prometheus himself then contacts Michael through the ASE. Michael asks for Prometheus to call off his forces, only to have the latter reveal that the whole plot was a set-up. After assisting Michael defeat the Drudge forces at the memorial, Prometheus reveals that he has found a Drudge base underneath the Library of Congress. Michael goes to the tunnels beneath the library, with Trust armour on, and destroys the Drudge nest. There, Adams contacts Michael and offers for him to rejoin the Trust, to which Michael replies "Go to Hell".

Michael then saves the president again, this time from puppet soldiers and Drudge forces. However, Michael's foolishness at going head-on into the mission, despite Prometheus' requests, cause the president to hand over control to the Trust. Michael would continue to fight against Adams, by next stopping him from gaining control of the US defense plans by stopping the Drudge from invading the Pentagon.

Michael was then alerted by Prometheus of the Trusts headquarters in Georgetown, where Ford wasted little time arriving at, by going through the city sewers and then a giant conduit. Ford quickly detained all Trust and Drudge operatives in the headquarters before finding the body of a progenitor, who Prometheus revealed to be himself. Michael absorbed Prometheus' body into the ASE to act further as a guide. In an effort to destroy the Trust, Michael destroyed the base and escaped it via a Conduit.

Destroying the Trust headquarters would not destroy the Trust as Michael would find out as he arrived on another one of their bases, the GLOMAR Oil Rig, this rig would soon be destroyed by the Leviathan. The Leviathan itself would take Ford to Atlantis where he would become the Destroyer by donning the Destroyer exoskeleton suit. Ford would then travel to Washington, D.C. to plot his next move on Adams, where the Free Drudge would honor him as the Liberator. Michael would then go around the globe, absorbing the energies of progenitors, in total taking four, including Prometheus' who then sacrificed himself. Atlantis was then attacked by Adams himself, whom Michael attacked and defeated, with the ASE signalling Tiamat and past Destroyer's arriving, claiming to want to "help" Michael.

"My name is Michael Ford. I'm probably the only one left who knows the truth...I know it, because I was there."

"All right. I'll go with you for now, but if you're lying to me, I'll take you down hard. Do you understand me?"

"What the hell are they?"

"Significant Body parts!? Aren't you a disembodied alien in a ball!?"

"And what if they pinpoint MY location with a plasma rifle?"

"You neglected to mention the giant alien standing on the bridge."

"Adams! What kind of game are you playing!?"

[Upon learning the truth about Prometheus] "I was wrong about you... I'm sorry."

[While Adams is asking if he thinks he can make a difference] "Sometimes one man is all it takes."

"You want me to walk around miles of hostile territory, poking around for a drudge nest?"

High Voltage Software claims that in the creation of Michael Ford they wanted to make him an "everyman", rather than an exaggerated "macho" character as is the stereotype associated with shooting games, like Duke Nukem. He was designed to allow the player to relate to him, whilst still providing some mystery and character throughout the game's plot twists.

Ironically in Conduit 2, Ford is voiced by Jon St. John, who also voices Duke Nukem. Michael Ford's personality also changes drastically from "everyman" to "macho action hero". An example of this would be Ford occasionally blurting out one-liners during fights or making jokes after Prometheus says something.

It was the intention of our Lord Adams to use Michael Ford as martyr, having him die in glorious battle against the Drudge invaders. This would galvanize public and political support behind the Trust until such support was no longer required. However, the Progenitor Prometheus interveined, somehow communicating with Ford through the All Seeing Eye device (see HVS77749). under guidance from Prometheus, Michael Ford has become a much larger problem, it is suspected that Prometheus has recruited Ford for his "Destroyer" program (see HVS01874)

After Ford graduated from West Point and served with the US Army, the Secret Service recruited him to become an agent. The idealistic young man threw himself into his new job and became one of the most dedicated and decorated agents ever seen. Ford is a serious man of few words. To him, serving his country - and the values his parents instilled to him - matters above all else. He's realized that perhaps he trust his authority figures too much. While it's led him to this life, its also why he failed to ask the right questions and take the right actions. 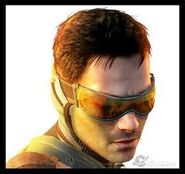 Mr. Ford
Add a photo to this gallery

Retrieved from "https://conduit.fandom.com/wiki/Michael_Ford?oldid=11510"
Community content is available under CC-BY-SA unless otherwise noted.