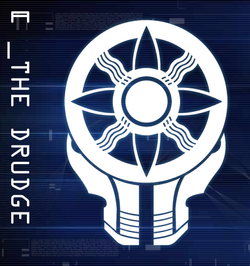 The Drudge, also known simply as Drudge, are a race of progenitor-human hybrids created from the genetic makeup of Prometheus[1]. They were initially thought to be a race of extraterrestrial beings that were invading Washington, D.C. for unknown reasons during the events of The Conduit.

During the events of Conduit 2, some Drudge, known as Free Drudge, break away from and rebel against Trust control, forming their own language, culture and society.

Before The Drudge existed, the Ducaz, an earlier form of a hybrid race existed, however the Ducaz failed their mission on exterminating Humans, and likely wiped out by their creators. It's unknown if the Ducaz were merely and earlier form of Drudge or something entirely different.

After failing to create progenitor-human hybrids through his own DNA, to launch his plan to rule the Earth, John Adams, through The Trust, created the Drudge through Prometheus' DNA. The DNA was used to create various kinds of Drudge, some resembling progenitors, some looking drastically different.

Alliance with the Trust Edit

The Drudge were initially used to have President Charles Thompson sign over executive control of the United States to Adams and combat Ford. Adams deployed the Drudge throughout the city of Washington, D.C. via conduits. Michael Ford would combat the Drudge in the Crisis of Washington, D.C. and find out how they were created in the Trust Base.

At the base, Ford would destroy Prometheus' body to prevent the further creation of the Drudge. However, this shattered the Drudge's link with the Trust. Following the death of all humans in D.C. due to poisoning, only the Drudge were left.

War With the Trust Edit

The Drudge then began fighting amongst each other in Washington, D.C. with some honouring the Destroyer Michael Ford, calling him the Liberator. These Free Drudge are likely capable of reproduction and have made their own culture and began to build their own city on the outskirts of D.C., while repairing the interior.

When the Trust once again came to D.C., they began to fight both the Free Drudge and the Drudge still loyal to them due to the fact it was hard to identity which Drudge was on which side. When Michael Ford came to D.C. to find the progenitor co-ordinates, he helped the Free Drudge in taking over Washington D.C.

Taking over D.C. supplied the Free Drudge with the equipment and knowledge necessary to make their own weapons and use Trust weapons. Outside of D.C., the Drudge still served the Trust and could be seen assisted them in China and Siberia.

The most common form of Drudge are Drones, this kind of Drudge closely resembles Prometheus. They always carry Strike Rifles, and sometimes throw radiation grenades. They usually attack in groups. These Drudge make up the majority of the Free Drudge, though it is possible that they are the Free Drudge. Drones are used as the standard infantry of the Drudge.

Scarabs are also used as part of the Drudge infantry and are the strongest aspect. They look more like Prometheus than drones and due to their large exoskeleton, they are extremely hard to kill. They are seen carrying a Hive Cannon to increase their strength. A sub-variation of the Scarabs are known as the Storm Scarabs, these Scarabs carry no weapons and have the ability to turn invisible, with the ASE required to make them visible.

Skimmers are Drudge that can fly. While smaller than Drones, they are larger than all Mites and carry a Shrieker. Skimmers have always been sighted flying and never walking, the only time Skimmers have ever even touch the ground is when they die.

Med-Mites have the ability to heal other creatures that they are around, as well as themselves. They are, however, unable to revive any creature and are seen carrying the Warp Pistol weapon. While Med-Mites do look different from Therm and Tear-Mites, they do bear some resemblance. Para-Mites are different looking from all different kinds of Drudge and are small worm like creatures. Para-Mites have the ability to fly and like Skimmers are never seen on the ground and can only attack by poking.

Invaders are giant quadrupedal creatures who are the most powerful form any Drudge. They have the ability to create small swarms of Para-Mites as well as shoot energy similar to ammo of the Shrieker. Invader's melee attacks are of the most damaging attacks of the game. Following the destruction of D.C., the Trust wanted to further explore D.C., to create bases for the Trust, to do so they used a new kind of Drudge. This Drudge acted as a tunnel system and while it could not attack, it was able to create nests from with Mites emerged.

Invaders are giant quadrupedal creatures who are the most powerful Drudge form. They can create a small swarm of Para-Mites, and can fire shots similar to those of the Shrieker. They act as bosses. An invader's melee attack is one of the most damaging attacks of the game.

The Drudge invade Washington D.C. through use of conduits. Conduits are portals that Drudge forces come out of. They are found on many missions. If the player does not destroy these conduits, more Drudge will keep emerging. The largest Conduit found in the game is seen in the first level and the eighth level, where a major battle pursues. Towards the end of The Conduit, it is discovered that the Drudge forces are being deployed through the conduits from The Trust's base of operations.

While the reproduction status of Drudge infantry is unknown, it is known that either the Drudge or the Trust are able to create egg sacs, from which various Mites can emerge from. It is possible that Mites are part of the Free Drudge, but lacks any evidence. Invaders have a similar feature with the ability to create Para-Mites, Invaders too may be a part of the Free Drudge, but the fact that not a single one is in Conduit 2 suggests otherwise. The Drudge tunnel system too is able to create nests from which Mites emerge. Due to having been deployed after D.C. was destroyed, the tunnel system and its Mites are loyal to the Trust.

The Drudge
Retrieved from "https://conduit.fandom.com/wiki/The_Drudge?oldid=11301"
Community content is available under CC-BY-SA unless otherwise noted.