The Widowmaker Turret is one of the new weapons in Conduit 2.[1] The turret can be placed almost anywhere, and can be controlled manually with a handheld device, or set to auto-control and function like a sentry gun. The gun is based on a temperature system. While it has infinite ammo, firing too quickly will cause the gun to overheat, however, using it in auto-targeting mode will prevent this. Even while auto-targeting, the operator must still press the fire button to make the turret fire. An alarm will activate when auto-target detects an enemy. This weapon can also be damaged by enemy fire.

With the Widomaker Specialization Primary Upgrade, the Widowmaker Turret can fire at non-stealthed targets automatically requiring no input, while still being able to manually control it with the alternative function button.

The handheld device presents all the information necessary to operate the turret, on auto-targeting mode, the gun's "health" is displayed in the top right corner with a simple precentage meter. When using manual aiming, the user sees the device's screen as it was an scope. In this mode, more information is available to the user, with a more precise health indicator, the rotation degrees used, the exact tempereture it has, and two lines that connect with the croshairs that represent how hot the gun is getting, the closer the lines get to the crosshair the hotter it becomes.

In multiplayer, the weapon will have colored shadows to indicate if it belongs to a teammate or an enemy, green is for teammate, and red is for enemies. This is important since they can be damaged by friendly fire. The turret can also be locked-on by a player, even when playing with lock-on disabled.

Cost: 26,000 Credits When placed fires fully-automatic flechettes. It automatically detects targets, warning the user when a target is available, and can be fired with the seperate controller. The controller can manually operate the turret by using the alternate function button. It is prone to overheating, and can be damaged by enemy fire. Category: Ballistics

"This weapon cannot be fired while held. Instead, users set up the weapon in a stationary position. Users can then use a remote to fire it or "look" through the weapon's eyes and fire at targets while standing in a relatively safe position. Note, this weapon can overheat if fired too quickly." 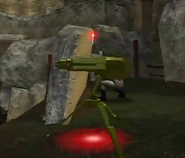 Add a photo to this gallery

Retrieved from "https://conduit.fandom.com/wiki/Widowmaker_Turret?oldid=11414"
Community content is available under CC-BY-SA unless otherwise noted.